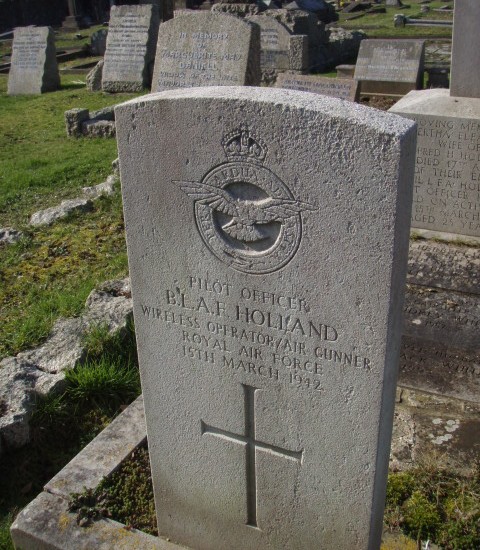 Close up of burial stone

Basil Leonard Francis Alfred Holland was born at Acton in Middlesex on the 20th of March 1917 the elder son of Sir Alfred Herbert Holland, a solicitor and Master of the Supreme Court of the Indicative Chancery Division, and Bertha Eleanor (nee Parrock) Holland of “The Clive”, Lunton Road, Acton, later of “Nightingales”, Penn in Buckinghamshire.

He was educated at Lancing College where he was in Gibbs House from January 1931 to 1934. On the outbreak of war, he was a law student.

He joined the Royal Air Force Volunteer Reserve in 1939 where he rose to the rank of Sergeant before being commissioned as a Pilot Officer on the 18th of August 1941. He was posted to 233 Squadron who operated Hudson aircraft from St Eval in Cornwall on reconnaissance missions over the Bay of Biscay.

His brother received the following telegram dated the 21st of May 1942: – “Deeply regret to inform you that further information now received states that your brother Pilot Officer Basil Leonard Francies Alfred Holland is reported to have lost his life as a result of air operations on 15th March 1942. The Air Council express their profound sympathy. His father has been informed.”

He is commemorated in the St Eval book of remembrance at St Mawgan in Cornwall, on the Allied Aircrew Memorial at Guernsey and on the memorial in the Lady Chapel at Holy Trinity Church, Penn.