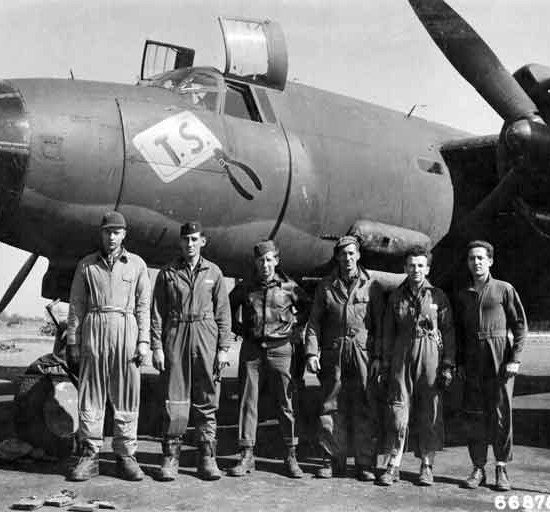 At 13.40 hours on 25 August 1944, thirty-six Martin B26 Marauders took off from their airfield at Matching Green in Essex and set course for northern France. From 572nd Bomb Squadron of the 391st Bomb Group, which was known as “The Black Death Group”, the bombers’ target were coastal defences near Brest at Pont-Scorff near Roscanvel on the Crozon Peninsula. This raid was at extreme range of the B26 and fuel usage would turn out to be a critical factor. The meteorological forecast predicted hazy but cloudless conditions over Pont-Scorff. Just over two hours after they had taken off, the bombers were over the target. Between 15.53 and 15.58 hours, the lightly-defended defences were hit by a total of 464 260lb fragmentation bombs. The USAAF formation then turned north-east for the outward flight. As the formation approached the English Channel all the aircraft began to experience low fuel levels. The lead flight of the second box of eighteen Marauders consisted of six aircraft. At the controls of the front aircraft, 42-95811-G nicknamed Ruthless, was pilot Sellars; behind him, in 42-95747-T, was pilot Dexter, his aircraft being alongside 42-95815-R Bun Steer, piloted by Cassiday. The third row consisted of Captain David H. Thorn at the controls of 42-95802-P, coded T6-P named Skeeter, whilst the fourth row four was Second Lieutenant Elma Z. Rice who was flying 42-95797-P, TS Ticket, alongside Edwards in 42-95102-X.

Approximately fifteen minutes after the bombing, Thorn, flying deputy lead, informed his flight that due to a severe fuel shortage he was going to leave the formation and set course for Cherbourg, his intention being to land at a forward Allied airbase in Normandy to refuel. Captain Thorn then dropped behind the formation and Second Lieutenant Rice pulled his ’plane up to take up a new position in row three. Suddenly, Thorn’s Marauder, which had broken formation, reappeared under the left wing of Rice’s B26. Rice pulled his aircraft up instantly, but before he could gain any altitude there was a sickening crash as the tail of Skeeter sliced along his wing and into the port propeller blade of TS Ticket. The tail empennage of Skeeter was torn completely off and it was last seen spinning down into the cloud. Only one parachute was seen to open.

In the subsequent reports Rice was described as displaying calm and quick thinking. He immediately feathered the damaged propeller of TS Ticket, though this caused the aircraft to slip violently to the left and lose altitude rapidly. Regaining control Rice checked on the rest of his crew, all of whom reported in safe except the tail gunner, Sergeant Thomas W, Hume, who had baled out at the moment of the crash – this was the parachute that was observed opening.

Deciding to head for an emergency airstrip in Allied-held Normandy, Rice put TS Ticket onto a heading given to him by another pilot in his flight. He followed this course down through the cloud and on emerging into the clear at 3,000 feet he found that he was heading east towards two small islands. A 2cm Flak 30/38/Flakvierling at Batterie Strassburg – possibly one of the guns responsible for shooting down TS Ticket. (Courtesy CIOS Guernsey)

As he approached the islands anti-aircraft fire opened up on him and he realised that he was heading for the islands of Guernsey and Jersey. Only a few shots were required by the German guns to get his range, at which point the flak increased in accuracy and intensity. It was noted in German records that the majority of the anti-aircraft fire came from Batterie Strassburg, on the south-east of Guernsey at Jerbourg Point.

Badly-damaged by the accurate German fire, the crippled TS Ticket continued to be rocked by near misses. One burst under the ’plane killed the radio gunner, Sergeant Melvin C. Shuler. Rice commenced evasive action, but the damaged Marauder answered sluggishly, receiving another hit which knocked out the starboard engine. With both engines out, TS Ticket had nowhere to go but down.

Lieutenant Rice skilfully dived the aircraft to avoid further anti-aircraft damage, pulling up the B26’s nose just above sea level. He then slowly let the tail drop into the water, followed by the rest of the bomber. The text-book ditching of TS Ticket ensured that no further injuries were suffered by Rice’s crew. All of the survivors were able to exit the B26 and swim to a safe distance before it sank south of the island of Sark.

His body trapped in the sinking fuselage, Sergeant Chuler went down with his aircraft. The rest of the crew, Elma Rice, Frank Moscovic, Donald Peters and Robert Hetrick, were picked up at 17.59 hours by the US Navy destroyer USS Borum. One of the 15.5cm K418 (f) guns at Batterie Moltke on Jersey which fired upon the US Navy destroyer USS Borum. (Courtesy of Steve Powell)

At this point, the position of the destroyer was reported as being just nine miles off the west coast of Jersey. The closest German artillery pieces were the four 15.5cm guns of Batterie Moltke at Les Landes. These opened fire with a salvo of one round from each gun, at which point the destroyer, its rescue work complete, made off at speed.

Meanwhile, there was a frenzy of activity in Skeeter. With no tail and its wheels down to increase drag and slow the aircraft’s gyrations, Thorn’s B26 had been sent spinning into the undercast. Lieutenant Russell J. Calvert, the navigator, had managed to struggle into his parachute, whilst the co-pilot, Lieutenant Arthur L. Thomas, was on his knees trying to open the wheel well doors, but these were apparently stuck. The radio gunner, Temporary Sergeant Edward J. Annette, opened the bomb bay doors and then closed them again. At about 500 feet Calvert managed to bale out through the pilot’s hatch. He was the only survivor.

The B26 continued its dive, moments later plunging into the sea near the Sept-Îles.

Picked up first, Lieutenant Calvert was assisted by French fishermen to recover the bodies of Captain Thorn and Lieutenant Thomas. Two other crew members, possibly the two gunners, Staff Sergeant Roy H. Meyer and Staff Sergeant Carl E. Norland, were pulled out of the rear fuselage, but died later in the hospital at Paimpol where they had been taken. The bodies of engineer gunner Staff Sergeant Omar L. Evans and the radio gunner, Technical Sergeant Edward J. Annette, were recovered from the sunken fuselage on the high tide on 6 September 1944. The body of the bombardier, First Lieutenant William H. Parks, who was in the Marauder’s nose, drifted to the north-east for a month before being washed up at L’Etacq, St Ouens on Jersey’s west coast on 27 September – he was buried by the Germans in the War Cemetery at Howard Davis Park, St Helier, and repatriated to the USA in June 1946. Having recuperated, Calvert reported back to Matching Green before the end of the year.

It was during January 2013 that an oxygen cylinder from an American bomber was trawled up by a Guernsey fisherman operating in the waters around Sark. The area it was found in would confirm it as having come from Second Lieutenant Rice’s B-26. Other parts of the aircraft have been found previously, including the port propeller and also the nose wheel, both of which were found in the late 1980s. However, the condition of the oxygen cylinder from inside the bomber would imply that the wreck is all but gone and that the contents of what is left are now scattered across the seabed, reminders of a tragic collision in 1944.