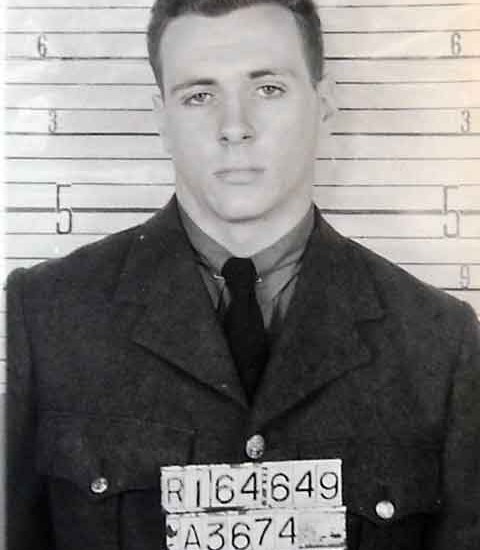 Flight Sergeant Biddlecombe enlisted in the RCAF on 20 May 1942 in Lachine, Quebec (now part of Montreal). Enlistment had taken a little time as the young Biddlecombe was underage and his father had to give permission to allow him to enlist, which he did in January 1942. Biddlecombe was of mixed nationality as his parents were living in New York City, his father being English and his mother American while he was born in the United Kingdom. Aircraftman Class 2 Biddlecombe began his basic training at No. 4 Manning Depot in Quebec City. On 13 September 1942, Aircraftman Class 1 Biddlecombe was posted to No. 3 Initial Training School at Victoriaville, Quebec where he learned the basics of the theory of flight and its engineering. There was also basic mechanics and meteorology, plus the Link trainer where it was confirmed that Biddlecombe had the potential to be a pilot. Accordingly he was posted to No. 11 Elementary Flying Training School, on the Ile de la Madeleine in the Gulf of the St. Lawrence on 6 December. After learning the basics of being a pilot, Leadign Aircraftman Biddlecombe was sent to No. No. 9 Service Flying Training School at Centralia, Ontario on 21 February 1943. Here he learned the military aspects of flying, which included formation flying and precision navigation. On graduation he was promoted to sergeant and sent for more advanced pilot training at No. 34 Operational Training Unit at Pennfield Ridge, New Brunswick. Here he met up with Sergeant R.T.W. Ulens, who was also RCAF and two members of the Royal Australian Air Force, Flight Sergeant David Badgery and Flight Sergeant Donald Ahearn who would all remain as part of his crew for the remainder of their service.

On 8 October 1943, Sergeant Biddlecombe was posted overseas departing from New York City. He arrived in England on the 16th and was then posted to the Senior Non-Commissioned Officer School at Whitley Bay from 24 November to 22 December. On 5 January 1944 he started his operational training in earnest as he was posted to No. 21 (Pilot) Advanced Training Unit where he was brought up to speed on the latest operational flying techniques. This included a period at No. 1511 Beam Approach Training Flight before he was declared ready to go on to an operational training unit. On 28 March 1944, Flight Sergeant Biddlecombe was posted to No. 13 Operational Training Unit where he would select and be selected as part of a crew that included. This crew was posted to No. 226 Squadron on 8 May 1944.

Late in the evening of 18 June 1944, F/S Biddlecombe and crew took off in Mitchell FL192 to attack a target in Normandy. The aircraft was last seen over the English Channel at 2:15 AM on the 19th. It was never seen again. F/S Biddlecombe’s body was washed ashore on 27 July and buried in the military cemetery at Fort George, Guernsey.