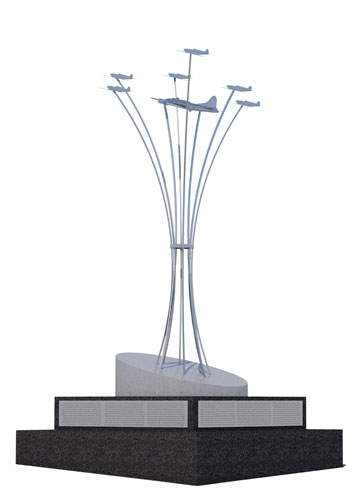 Flying Officer Leaming was living in Leaside, Ontario when he enlisted in the RCAF on 11 September 1941.

Originally selected to be a wireless operator / air gunner, during his training at No. 1 Manning Depot his hard work and above average abilities suggested that he might be better qualified as a pilot or observer. On 21 December 1941 Aircraftman Class 2 Leaming was posted to No. 6 Initial Training School at Toronto, Ontario where he learned the basic knowledge of flight and aviation mechanics. Testing on the Link Trainer confirmed he could be a good pilot. On 14 February 1942 Leading Aircraftman Leaming was sent to No. 20 Elementary Flying Training School at Oshawa, Ontario to become a basic pilot. Here he was selected to become a multi-engine pilot where on 25 April he was posted to No. 1 Service Flying Training School at Borden, Ontario to develop his military flying skills such as formation and night flying and precision navigation. Receiving his pilot’s wings and, due to his noted hard work and being near the top of the class, he was commissioned as a pilot officer on 14 August. P/O Leaming was then posted to No. 31 General Reconnaissance School at Charlottetown, Prince Edward Island to develop his maritime reconnaissance skills before proceeding overseas.

On 10 December 1942 P/O Leaming was transferred to the RAF. As with other RCAF pilots newly-arrived in the UK, he was sent to an Advanced Flying Unit, in this case No. 19 (Pilot) Advanced Flying Unit, from 12 January to 16 February 1943 in the process of which he was promoted to flying officer. He then was sent to 407 Squadron until 17 July after which he went on his operational training unit course at No. 3 (Coastal) Operational Training Unit where he would select a crew, as well as being selected by his fellow aircrew. Here he met up with RCAF member Pilot Officer Lloyd Nairn who became his navigator. On 29 September the crew was posted to No. 179 Squadron flying Wellington Mk IIIs on anti-submarine patrols.

On 29 December, F/O Leaming was the 1st pilot of the crew that included fellow Flying Officer Nairn. Their Wellington had to make an emergency landing at Gibraltar. F/O Leaming had over 300 flying hours by this time.

Flying Officer Leaming was 21 years old when he was killed.