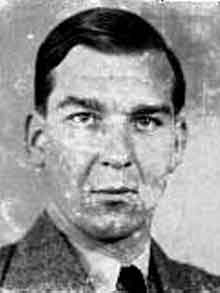 Kenneth Basil ‘Robbie’ ROBINSON, 1126985 / 139816, RAF Volunteer Reserve, was born in Killiney, Dublin, Eire, on 14 April 1922. He was educated at Portora Royal School, Enniskillen, Northern Ireland. He joined the RAFVR, in Belfast, on 27 June 1940. He was sent to Stratford-on-Avon for basic training and later in 1940 to learnt to fly with 10 Initial Training Wing, Scarborough. In 1941 he moved again to 1 Elementary Flying Training School, Hatfield, then onto 5 Service FTS, Ternhill, where he was promoted to Sergeant Pilot and issued with the NCO service number (1126985), he finished the year at 4 SFTS, Cambridge. In early 1942, he joined Course 35, at 57 Operational Training Unit flying Spitfire’s from Hawarden, Flintshire, Wales. From 28 April until 30 June 1942 he served with 41 Squadron, and on 1 July he was promoted to Probationer Pilot Officer and was now issued with an Officer’s service number (139816) on 16 January 1943, he was again promoted to Flying Officer (war substantive). On 16 July 1943 he returned to 41 Squadron.

On 7 June 1944, D-Day +1. It was an early start for 41 RAF Squadron, and they were airborne at 05:30 for two shipping reconnaissances. Red Section, consisting of Flight Lieutenant Terry Spencer (Spitfire MB882) and Flying Officer Keith Curtis (Spitfire EN620) headed for St. Peter Port, St. Malo and Lézardrieux, whilst Yellow, comprising Flying Officer Harry Cook (Spitfire MB795) and Flight Sergeant ‘Steve’ Stevenson (Spitfire MB845) were assigned Morlaix, L’Aber-Wrac’h and Ushant [Île d’Ouessant]. Whilst the latter pair found nothing of interest, and returned at 07:15 reporting an uneventful patrol, the former was more successful.

Arriving over St. Peter Port at 06:10, Spencer and Curtis were greeted by intense light Flak, but sighted what they thought were at least a dozen Tank Landing Craft. Continuing on, they then saw five medium class Minesweepers and a torpedo boat north of Cap Fréhel at 06:25, heading towards St. Malo at a speed of approximately 15 knots. The two pilots then headed for Harrowbeer to report their sightings, then continued on to Bolt Head, where they landed at 07:12.

The reaction to this information was swift. So an anti-shipping mission, known as Roadstead 126 was quickly laid on and an hour later eight Typhoon bombers of 263 Squadron were sent to attack the Minesweepers with an escort of eight Spitfires from 610 Squadron. They found a large, 1,500-ton motor vessel in the mouth of The Rance river, at St. Malo, but could only straddle its stern with near misses. Unfortunately, no other shipping was seen.

The twelve vessels Spencer and Curtis had seen at St. Peter Port were the target of a second anti-shipping mission, known as Roadstead 127, which was airborne 25 minutes after Roadstead 126. 263 Squadron was once again involved, this time deploying eight Typhoons fitted with RP-3 Rocket Projectiles. A close escort was provided by eight Spitfire XIIs from 41 Squadron, in two sections of four, led by Flight Lieutenant Tom Slack and Flying Officer Peter Cowell. The 16 aircraft came in low over St. Peter Port and recognised, “a group of long narrow barges in the centre of the harbour which were probably responsible for the previous reports of the presence of T.L.C’s”. However, a small group of ships were also seen on the northern side of the harbour, and these were attacked instead. 263 Squadron’s rockets were seen to burst amongst them, but the results were not observed owing to significant amounts of smoke. The pilots encountered intense light and heavy calibre Flak, which broke up the sections, and in the furore of the battle three of the Squadron’s eight aircraft were hit: Cowell in the wings, Collis in the tail and Robinson in the radiator. However, no-one was injured. Flying Officer Robinson pulled out of the mêlée and headed northwards, but the damage to his aircraft was too serious, and he soon radioed Cowell that he would have to bale out. He climbed to 10,000 feet, issued maydays, inverted his aircraft, unstrapped and dropped to the sea below. It was 09:10.

Whilst the Squadron ORB refrains from recording the location that Robinson baled out, the Bolt Head ORB places him 20 miles north of Guernsey, the 10 Group ORB records the coordinate vY6300, and the 10 Group ORB Appendix states it was 40 miles south-southeast of Start Point.

Unfortunately, however, when he baled out, his dinghy became detached from his parachute, and he landed in the Channel with no floatation device but his Mae West. As the rest of the pilots were still being tied up with the operation, it took some time for Collis to locate Robinson and drop him his own dinghy. Whilst Cowell and Stowe escorted the Typhoons home, Collis stayed to orbit Robinson until help came.

Robinson attempted to get into the dinghy that Collis had dropped, but the seas were rough and he was thrown out again and lost hold of it. Thus began a significant rescue operation over several hours, and although the exact timings are unknown, several successive attempts were made to save Robinson, which involved at least two more aircraft of 41 Squadron, and two Spitfires, two Walruses and a Warwick all of 276 (ASR-Air Sea Rescue) Squadron. A number of dinghies and a boat were dropped to him down wind or too far away, and a Walrus landed on the sea, but the conditions were too rough to reach him. Finally an ASR High Speed Launch from Salcombe reached the area and took Robinson aboard, but he did not survive this 18th attempt to rescue him. Artificial resuscitation was performed without success, and he could not be revived. The launch returned to Salcombe with Robinson’s body, towing the Walrus as it did, as the aircraft had been unable to take off again in the rough conditions. They arrived in port at 17:30.

The Squadron was dumfounded by his loss. Robinson had not been wounded by Flak, rather he either drowned or succumbed to the effects of hypothermia, likely the latter as was in the water at least six hours. His death affected everyone and the rest of his section and his Flight Commander all made remarks about it in their logbooks that day:

Cowell: Red 1. ‘Robby’ Red 2, shot down by flak from Guernsey. Picked up drowned by Walrus. Damned bad luck. I was hit by flak in 4 places. Each wing.

Collis: Escort R/P Typhoons St Peter Port. Own a/c hit in tail – Landed with only 5-10 gallons. Threw dinghy to Robinson – who got into it.

Stowe: Roby hit by Flak (Guernsey) bails out but picked up dead – No dingy.

Spencer: Robbie shot down escorting Tiffies… He bailed into the drink – no dinghy – died of cold.

I flew with him on 7 June 1944, his last flight. At that time, I was Squadron Adjutant, a system which was inaugurated for a brief time, and was therefore much involved with his loss – specifically in clearing up his things and meeting with his relations.

We had been supporting an attack by rocket firing Typhoons on St. Peter’s Port and were returning to base at Bolt Head, when Robinson found he had been hit and had to bale out…. Then followed an agonizing period in which he was struggling in a fairly rough sea and, although he got into his dinghy, he was unable to cope. I stayed with him, presumably calling for Air Sea Rescue help, but finally had to leave, as I only had enough gas for a short time.

Before leaving I was able to wriggle out of my dinghy pack and dropped it very nearly on him. On the way back I met the ASR aircraft and turned back to show them where they would find him. I then continued to return to base, where I landed for a total time of 1 hour 50 minutes, which was cutting it very fine; I landed with 5-10 gallons of gas.

Escort of Typhoons to Guernsey. Robby in the drink. Hit by flak, he had to bail out. Being Irish, he didn’t have his life-raft attached and as a result in the rough seas it drifted beyond his reach. Circling over him, two of us managed to get our rafts from under our bums and chuck them out to him. No mean feat in the confined space of a Spit cockpit! He reached one, got into it, but was immediately thrown out by the rough water. He lost this one too and was left drifting around in his Mae West. At this stage, the ASR Walrus arrived on the scene. I’ve got to hand it to those chaps. Just landing in those seas was a feat in itself, especially as they were under intermittent gun fire from German forces on the shore! They made at least a dozen passes at Robbie before they finally managed to get him aboard. Unable to take off in the rough water they set off to taxi back to England until eventually a Navy Destroyer took them in tow. Unfortunately, we learned later, Robbie was dead when they finally got him aboard. No doubt he died from hypothermia.

A summary of Robinson’s loss was recorded at the time on his Pilot Service Record, which states,

7.6.44 Baled out N of Guernsey after being hit in Radiator by Flak. Lost his own dinghy & from others including A.S.R. Boat dropped down wind of him. Then F/L Collis dropped his after giving Maydays at 10000 feet & Robinson was seen to get in & was quite cheerful. Some hours later reports came in from A.S.R. that he was picked up dead by launch after many attempts by Walrus. By the time of his loss, 22-year-old Robinson was in his second tour with 41 Squadron, having originally joined the unit as an NCO pilot fresh from OTU in July 1942. He was posted overseas in October 1942 and returned as a Flying Officer in mid-January 1944. He is buried today in Buckland Monachorum Cemetery in Devon.
Royal Air Force Volunteer Reserve
07
Jun
1944
Roll of Honour > Timeline > Royal Air Force Volunteer Reserve > ROBINSON, Kenneth Basil