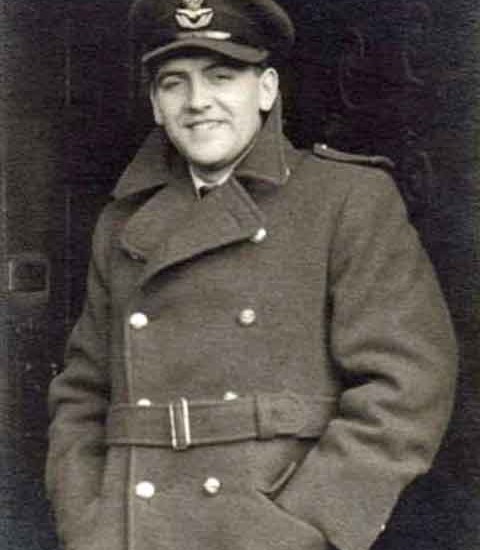 Hugh Harold Percy of Chwilog, Gwynedd, Caernarvonshire was born on 15 January 1920 in Midhurst, Kent the son of John Hugh Percy and Josephine Bell. Percy was educated at Bradfield College and St. John’s College, Cambridge. He learned to fly with the University Air Squadron in 1939 and was called to full-time service soon after the outbreak of war. Percy was commissioned in early November 1939, at No. 1 ITW (Initial Training Wing) Cambridge and was afterwards posted to FTS (Flight Training School) Cranwell on No. 2 War Course. With the course completed at 5 FTS Sealand, he was sent to No. 1 School of Army Co-operation at Old Sarum.

On 10th June 1940 Percy arrived at 5 OTU (Operational Training Unit) Aston Down and after converting to Defiants (a two seater turret fighter) he was posted to 264 Squadron at Duxford on 19th June and he became one of the Battle of Britain pilots.

On 22 May 1944 when at 09:00 four Spitfires of 610 Squadron took off from their base at Bolt Head, Devonshire on an armed shipping reconnaissance in the Channel Islands, Guernsey area, during which the flight leader, 24 year old, Flight Lieutenant Percy in a MkXIV Spitfire RB162 was hit by anti-aircraft fire from Bréhon Tower. (Official reports give Plienmont Tower) Percy climbed to 1,500 feet and bailed out, but unfortunately his parachute failed to open, his aircraft glided down to the south and crashed into the sea off Jerbourg, Percy’s body was never recovered. Ralph Durand reported “Four planes flying low down the Russel Channel and firing on Bréhon Tower” An action report from Batterie Straßberg reported; “Between 09.30 and 09:32 enemy aircraft were fired on by our 2cm Oerlikon at a range of 1,500 meters. Numerous hits were observed on one of the aircraft and it was seen to crash into the sea, some 10 kilometres south of the battery. A total of 110 rounds of 2cm were fired.”

When the remaining pilots from 610 Squadron were unable to locate Percy they returned to base and landed at 10:10 and gave their report. A search was commenced with three Spitfires of 276 Air Sea Rescue Squadron, they left their base at Bolt Head at 10:55, to search 2 miles west of Guernsey, this was due to the inaccurate report about Plienmont Tower, as such nothing was seen, they landed again at 13:15.

There appears no report of the action surviving from Bréhon Tower regarding what happened there. What is known is on that day Gefreiter (Corporal) G Kühn was killed and later buried at Baugy Cemetery, Jerbourg. As there is no other reported actions that day, it is possible but unconfirmed that his death was as a result of this air-attack on the tower.

By John Goodwin and Simon Hamon