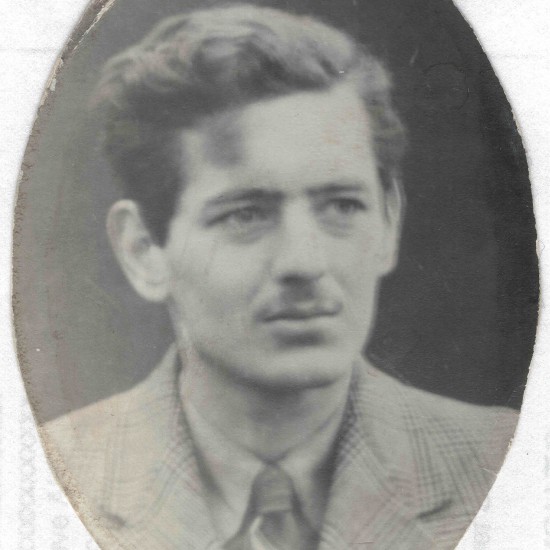 Born Patrick Sidney William Daniel in December 1921 in Marylebone, London, England the son of Emil McCarthy DANIEL and Agnes Ann Sidney DANIEL (Nee WILKINS). He married Beatrice Doreen APPLEBY in 1941 in reading and at date posted as missing she was residing at 44d Lexham Gardens, Kensington.

Sgt. Daniel transferred from 59 OTU (Operational Training Unit) to 247 Squadron on 22 August 1941 along with five other pilots, none of which survived the war. Sgt. “Danny” Daniel arrived one day with a chow dog named “Redcap” which was said to resemble a mobile Irvin flying jacket. The dog would never leave the dispersal area while his master was flying and would only leave after his safe return, it could always hear the aircraft long before anyone else.

On Monday 28 February 1944 the squadron was put on standby and at 0650 hrs, two Hawker Typhoon’s of 247 Squadron took off for a dawn weather reconnaissance flight over Cherbourg, from their base at RAF High Ercall in Shropshire. The two pilots that morning were Flying Officer Kyle “Killer” Bowering Sellick DFC (407755) and Warrant Officer Patrick Sidney William Daniel.

On the way out no difficulty was encountered, although some Flak was seen, but some distance away. However when near the Channel Islands W/O Daniel flying his Hawker Typhoon mark 1b reported over the RT (Radio transmission) that his engine was cutting and F/O Sellick observed blue smoke coming from his no. 2 engine which turned to black smoke coming from the starboard exhaust. The aircraft was JP730 “p” coded ZY – M. W/O Daniel reported a complete engine failure and said he was going to bail out. His wing man stated “He appeared calm and collected and his subsequent escape from the aircraft and descent were carried out very efficiently. He landed in the sea about 4 miles from the island of Sark. I circled him and could see him in the water getting his dingy out from the pouch attached to his chute. After this I missed him in the heavy swell, but reported his position. The wind was blowing North West and there must be a good chance he has been washed ashore.”

After landing Flying Officer Sellick took off as part of a four aircraft air sea rescue flight taking off at 08:25, the patrol searched the area 3 miles North of Sark without success they landed again at 09:40 and another flight was laid on by 247 Squadron again with four aircraft taking off at 10:25 and landing unsuccessfully at 11:40. The searches continued all morning with three more flights laid on in search for W/O Daniel. However the squadron feared the worst as the sea was fast running and heavy and it was thought that he would not survive long in such cold waters that day. Someone wrote “Our hopes for his safety are optimistic of course, but the facts are dampening.” His faithful chow dog “Redcap” as it refused to leave the dispersal area as Danny did not come back, in fact the dog could not be moved and so his wife was called down to the airfield to collect it.

W/O Daniel’s body was washed ashore 26 March 1944 near Cap Erguy, 18 miles east of St Breiuc. He was identified from a silver wrist band found on his body inscribed “1182509 PSW Daniel RAF”. He was buried in St Brieuc west cemetery Gr. 5 Row 6.

W/O Daniel was posthumously appointed to his commission in the RAF as a Pilot Officer with effect from 12 January 1944.