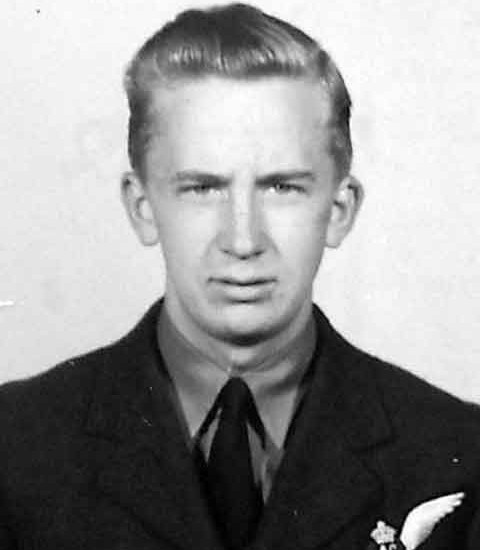 Sergeant Rodgers was a student at McGill University in Montreal when he enlisted in the RCAF on 26 November 1942 and was considered suitable as aircrew. He had already joined the Canadian Army’s McGill University section of the Canadian Officer Training Corps the previous year and had not yet completed his studies. It was not until 22 February 1943 that Aircraftman Class 2 Rodgers began his training at No. 5 Manning Depot in Lachine, Quebec (now part of Montreal).

On completion he was sent to No. 1 Manning Depot in Toronto where he learned the basic theory of flight and the mechanics of flight. It was here that it was decided that he would be serve as an air gunner; however, he was missing some educational qualifications and was sent To Queen’s University in Kingston, Ontario for a month to take the necessary course. On 11 June 1943, Leading Aircraftman Rodgers began his air gunner training at No. 2 Air Gunners Ground Training School at Trenton, Ontario where he learned the theory of air gunnery after which he went to No. 9 Bombing and Gunnery School at Mont Joli, Quebec to conduct the practical training. Having completed all his courses Leading Aircraftman Rodgers was promoted to sergeant and after two weeks leave proceeded to the UK.

Sergeant Rodgers arrived in the UK on 8 October 1943. On 2 November he was posted to No. 16 Operational Training Unit where he would select and be selected as part of a crew, which in this case included fellow RCAF Members Flying Officer John Johnson, Sergeant Mitchell and Flying Officer Nap Perry.

On the night of 25 January 1944, with their training almost complete, Sergeant Rodgers and the rest of his crew took off at 7:22 PM in Wellington BK501 to drop leaflets on Granville, France. They did not return from this mission. Sergeant Rodgers was 19 years old at the time of his death.