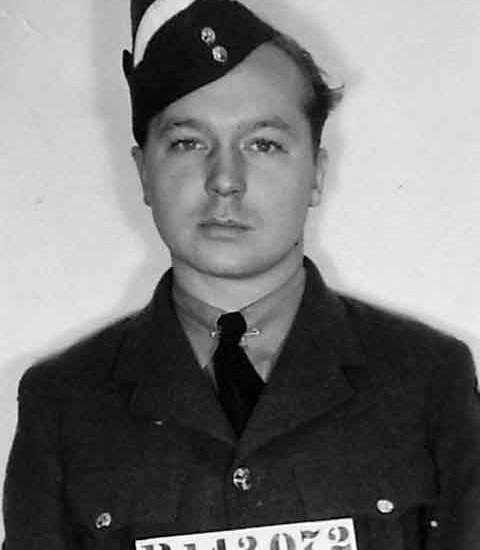 Flying Officer Perry was working at Douglas Aircraft in Santa Monica, California when he decided to enlist in the RCAF. Originally from Springfield, Missouri, USA, he travelled to Vancouver and enlisted there on 19 November 1941. He was at No. 3 Manning Depot in Edmonton, Alberta undergoing his basic training when the Japanese attacked Pearl Harbour. Despite the opportunity to switch to the United States Army Air Force, he elected to remain with the RCAF.

Aircraftman Class 1 Perry started his RCAF training on 25 April 1942 at No. 7 Initial Training School at Saskatoon, Saskatchewan where he learned the basic theory of flight and flight mechanics as well as undergoing testing in the Link Trainer. These latter tests suggested he would be suitable as a pilot so Leading Aircraftman Perry was posted to No. 6 Elementary Flying Training School at Prince Albert, Saskatchewan on 1 August and completing his basic pilot training was posted to No. 10 Service Flying Training School in Dauphin, Manitoba.

Unfortunately, he did qualify in this course and was sent to No. 1 Composite Training School in Trenton, Ontario while his fate was decided.

As Leading Aircraftman Perry had been found suitable to be aircrew, it was eventually decided that he should become a bomb aimer. On 8 January 1943 Leading Aircraftman Perry was posted to No. 7 Bombing and Gunnery School at Paulson, Manitoba. He successfully completed this phase of his training and on 3 April was sent to No. 4 Air Observer School at London, Ontario to conduct the next phase. The faith the RCAF had in him was not misplaced as he graduated on 14 May and, ranking near the top of his course, was commissioned as a pilot officer.

On 29 May Pilot officer Perry was posted to No. 1 Bombing and Gunnery School at Jarvis, Ontario where he would spend one month before being posted overseas.

On 23 July 1943, Pilot Officer Perry arrived in the UK. It was only on 11 September that he began his preparation for operations, being posted to No. 5 Air Observer School until 9 October. He then went to No. 1476 Advanced Ship Recognition Flight until 2 November and finally to No. 16 Operational Training Unit on 2 November 1943.

At 16 OTU Flying Officer Perry, who had been promoted to that rank as of 14 November, would select and be selected as part of a crew, which in this case included fellow RCAF Members Flying Officer John Johnson, Sergeant Mitchell and Sergeant William Rodgers.  As part of their training, OTU crews would participate in mine laying and leaflet dropping operations to build teamwork and prepare for operational missions.

On the night of 25 January 1944, with their training almost complete, Flying Officer Perry and the rest of his crew took off at 7:22 PM in Wellington BK501 to drop leaflets on Granville, France. They did not return from this mission. His body washed ashore at Barneville, France on 28 January. Flying Officer Perry was 28 years old at the time of his death. Close up of Memorial Stone