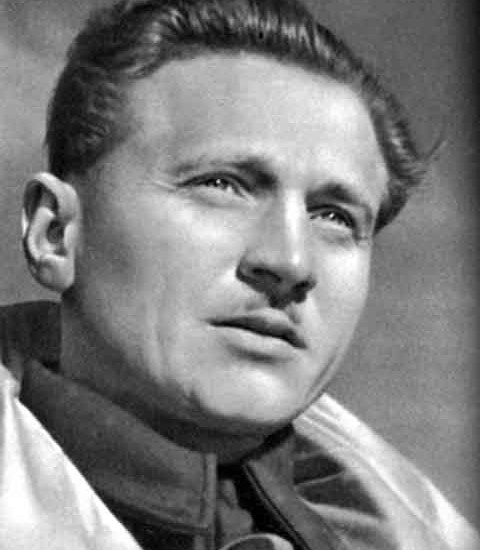 On 14 May 1943 an Allied air attack took place over St Peter Port. The raid named Roadstead 2 was laid on as an anti-shipping strike against reported E-Boats off St Peter Port harbour. The attack took place at 20:30 hours with 23 attacking Spitfires from both 312 and 313 Squadrons, they approached Guernsey at wave top height.

The Germans saw the aircraft approaching and the alarm was raised and the Flak guns defending the harbour put up a huge wall of Flak in defence it was all calibres and colours including machine gun fire, despite which the aircraft pushed home their attack on a convoy consisting of twelve boats, claiming four hit, with three damaged and one probably sunk, although they in fact did not sink any. They had also fired in retaliation towards Bréhon Tower as it was recorded later that one crew members was killed and there was also another crew member badly wounded in the same attack.

The action that evening was described by the pilots as complete hell, with flak bursting all around the aircraft which made it difficult in manoeuvring due to flying so close together, they could not go up any higher as the flak was bursting above them, they did not want to go any lower as they felt their propellers were already too close to the waves and so bunched together they were stuck flying in a very narrow corridor banking over to make the attack. One pilot was 27 year old Flight Officer Jaroslav Novak (service number 117370) of 312 Czech Squadron. Novak’s aircraft was a Mk Vb Supermarine Spitfire EP539 with the squadron code DU – C, which received a hit in the starboard side of the engine and it immediately billowed with thick black smoke, his starboard wing tip was also shot off, so he turned his aircraft away from the harbour heading south east with three other aircraft in his flight following.

Novak radioed to say he was going to try and parachute out but he was unable to get the Spitfire to climb any higher than the 100 feet that he was at, so he decided to make an emergency crash landing on the sea, he jettisoned his canopy and just after that his engine stopped, he glided down, well away from the coast, no doubt trying to avoid the flak from the coastal batteries which had now joined in shooting at them. His comrades knew he could not avoid the crash and radioed him “Good bye Yardeskie and good luck”, he replied “Good bye boys give my best wishes …” the message was cut off, his last words were no doubt intended to his young wife he married just a few weeks earlier. He struck the water at speed, the sea was very rough that day and he was never seen again, only the red, white and blue stripes on his tail fin could be seen by his comrades as they circled overhead, Novak no doubt was killed on impact, his body was sadly never recovered.