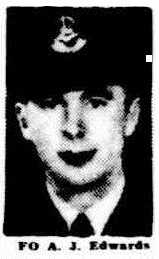 Allen joined the Royal Australian Air Force on 31 March 1941 in Adelaide, his service number was 416166.

On 25 Monday January 1943 when flying for No. 541 Squadron (RAF), 35 year old Flying Officer Allen Grayson Edwards took off from RAF Station, Mount Farm, Dorchester on Thames, at 11:16 hours to carry out a photo reconnaissance mission over the Chateaurue and Clermont Fenraud area, Southern France. He was in a Supermarine Spitfire PRlV BR660.

During the mission Flying Officer Edwards  began to have trouble with his engine and so asked for homing signal at 15:20 hours while in the Caen area, France heading for Start Point, England. At 15:32 hours the pilot reported that he was preparing to bale out,  but at 15:35 hours he radioed that  “I have got another kick out of her”. This was the last message received and the aircraft was plotted at 13,000 feet altitude and approximately 11 miles south west of Guernsey, Channel Islands.

The air sea rescue (ASR) service was alerted but were unable to carry out a search due to the weather conditions and the range of the search area away from the English coast, so a distress signal was broadcast to the German ASR service, but no news was forthcoming from Germany. It is known that no trace was found of the Spitfire or Flying Officer Edwards were ever found and it is suspected his aircraft suffered from engine failure. The weather forecast for the target area was broken cloud with considerable cloud over the whole of the north of France on track to the target area.