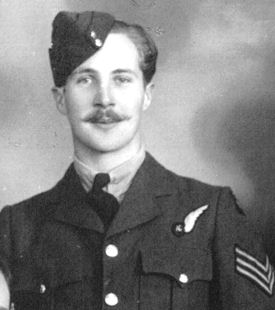 David was the son of Charles and Elizabeth Urquhart and he was born on August 27, 1921 in Manitoba.

His father and mother were born in Scotland. He had a younger brother, Charles Arthur Ian who also served in WW II.

David completed Grade 11 in High School and was a farm hand from 1940-1941. His hobbies included water colour painting, swimming, hockey and dancing. He was engaged to be married when he went overseas.

He attested in Winnipeg on July 19, 1941; was 5 feet 7 inches in height and had a fair complexion, blue eyes and brown hair. At the time of David’s attestation, his father was deceased.

Flight Sergeant David Urquhart enlisted in Winnipeg, Manitoba on 19 July 1941 considered as either a pilot or an observer.  He immediately began his training at No. 2 Manning Depot in Brandon, Manitoba and on 2 September was posted to No. 3 Bombing and Gunnery School at MacDonald, Manitoba.  Here he had to wait until a training billet opened up for him, but the time was not wasted as he had the opportunity to mingle with other trainees and learn from them.  On the 26th he was posted to No. 2 Initial Training School in Regina, Saskatchewan where Aircraftman Class 1 Urquhart would be taught the basics of the theory and engineering of flight, the basics of engines and of navigation. Having been enlisted to serve as either a pilot or an observer, as navigators were then known, the tests at No. 2 ITS suggested he would not be successful as either, which was not uncommon.  However, having been selected as aircrew, the RCAF made the effort to retain him in an aircrew trade and Leading Aircraftman Urquhart found himself re-mustered to air gunner.  But first he had to spend time a month at No. 1 Composite Training School at Trenton, Ontario, waiting for a training billet to open for him.

On 20 December 1941, LAC Urquhart was posted back to No. 3 Bombing and Gunnery School, this time to begin his training as an air gunner.  Graduating on 20 January 1942 he was promoted to sergeant and posted to England.  After two weeks embarkation leave and a stormy sail across the Atlantic, he was posted to No. 1 Air Armament School and to No. 7 Air Gunnery School to be brought up to speed on the latest air gunnery techniques. Finally, Sgt Urquhart’s operational deployment was in sight.  He was posted on 26 May 1942 to No. 22 Operational Training Unit where he linked up with four other members of the RCAF to form a crew.

Normally, crews at OTUs were given less dangerous missions such as minelaying and leaflet dropping to familiarize them with operational missions; however, these flights were not without their dangers.  On one of the operational missions, Sgt Urquhart’s crew was flying back to England and while crossing Walcheren Island was coned by searchlights.  The pilot, Warrant Officer Class 2 Cronk dived down to 50 feet to escape the lights but in the process brought the aircraft within range of machine guns, which began to fit the fuselage with rounds.  Although the aircraft was not seriously damaged, the wireless operator, Flight Sergeant Cachia was hit in the upper right arm.

On 14 August 1942, Sgt Urquhart and his crew were posted to No. 425 Squadron. Because the newly-formed squadron was still in the process of becoming fully-operational, it would be a while before the crew would go on their first operational mission.  In the meantime, there was a promotion to flight sergeant on 12 September for Sgt Urquhart.  Finally, the first flight as a crew was on 17 November when they were one of three aircraft who dropped mines.  The next mission was on 23 November when they took off on a four-hour daytime reconnaissance flight over the North Sea.

At 4:59 PM on 6 December, F/S Urquhart and his crew took off in Wellington BJ657, call sign KW-G.  They were part of a 272 plane operation against Mannheim, with F/S Urquhart being the rear gunner.  Nothing special was heard from them until 12:20 AM on 7 December at which time the radio officer, Warrant Officer Class 2 John Cachia requested a bearing to fly to return to base.

This was the last that was heard of F/S Urquhart and his crew.