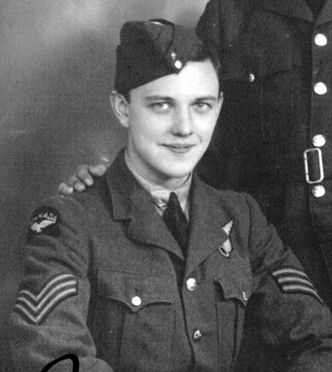 John, known as Dave, was a son of Reverend William and Mrs. Margaret Rodger. He was born on June 12, 1921 in Winnifred, Alberta. He had a brother, William, and a sister, Margaret. An older sister, Jean died when she was young.

He attended Public and High Schools in New Brunswick, and was a student at Mount Allison University in New Brunswick where he was studying Arts, Literature and Theology. He was mid way through his third year there, being noticed by his professors as an exceptional student with a natural skill for foreign languages. Whilst at the university he was member of the Militia.

John attested for the RCAF in Moncton, New Brunswick, on February 10, 1941. His hobbies were swimming, skating and skiing. He was five feet, eleven inches; 174 pounds with a fair complexion, green eyes and dark brown hair.

Pilot Officer John David Rodger was attending Mount Allison University in Sackville, New Brunswick when he decided to cut short his studies and enlist in the RCAF. With one year to go until his graduation, Rodger was a promising linguist when he enlisted in Moncton, New Brunswick on 10 February 1941 to be employed as either a pilot or an observer. On 18 February, Aircraftman Class 2 Rodger began his basic training at No. 1 Manning Depot in Toronto.

On graduating he had to wait for a training billet to open so he was posted to No. 1 Service Flying Training School at Camp Borden, Ontario. Here he would have had a chance to talk to fellow pilot trainees as well as be inculcated in the RCAF traditions and spirit. Finally, on 16 May he was posted to No. 3 Initial Training School in Victoriaville, Quebec. Here he learned the basics of the theory and engineering of flight, the basics of engines and of navigation. At the same time, tests at No. 3 ITS suggested he would best serve as an observer, as navigators were then known. The only delay in his training was an emergency appendectomy.

On 31 August 1941 having completed his ITS course, Leading Aircraftman Rodger was posted to No. 10 Air Observer School in Chatham, New Brunswick to finally begin his observer training. He completed this successfully and was posted to No. 6 Bombing and Gunnery School at Mountain View, near Trenton, Ontario. Observers were not only navigators, they were also bomb aimers at this time. On 17 January 1942, LAC Hayes was fully trained to observer standards and was promoted to sergeant, fully qualified to serve as aircrew. On 18 February, Sgt Rodger was posted to England, but it would not be until mid-March that he actually got on a transport. On arrival in England he again had to wait for a training billet to become available, but was finally sent to No. 3 Air Observer School at RAF Bobbington where he was brought up to speed on the latest navigation techniques.

On 26 May, Sgt Rodger was then posted No. 22 Operational Training Unit where he joined up with four other members of the RCAF to form a crew led by Warrant Officer Class II George Edward Cronk who was the pilot. Training at 22 OTU included operational missions dropping mines or leaflets, which was not without its dangers. On one of the operational missions, the crew was flying back to England and while crossing Walcheren Island was coned by searchlights. Warrant Officer Class 2 Cronk dived down to 50 feet to escape the light but in the process brought the aircraft within range of machine guns, which began to fit the fuselage with rounds. Although the aircraft was not seriously damaged, the wireless operator, Flight Sergeant Cachia was hit in the upper right arm. While at 22 OTU, Sgt Rodger was promoted to Flight Sergeant on 17 July.

On 14 August 1942 F/S Rodger and his new crew were posted to 425 Squadron. At this newly-formed squadron, they had to wait their turn as the squadron began to grapple with becoming fully operational. The first flight as a crew was on 17 November when they were one of three aircraft who dropped mines. The next mission was on 23 November when they took off on a four-hour daytime reconnaissance flight over the North Sea.

At 4:59 PM on 6 December, F/S Rodger and his crew took off in Wellington BJ657, call sign KW-G. They were part of a 272 plane operation against Mannheim, with F/S Rodger acting as the bomb aimer. Nothing special was heard from them until 12:20 AM on 7 December at which time the radio officer, Warrant Officer Class II John Cachia requested a bearing to fly to return to base.

This was the last that was heard of F/S Rodger and his crew. He was posthumously commissioned as a pilot officer, backdated to 30 November.