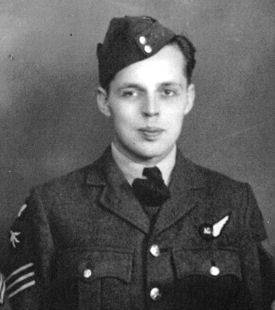 John, known as Jack, was the son of Paul and Aloysia Cachia. He was born in Toronto, Ontario on December 28, 1921. He had three brothers, two sisters, three half brothers and a half sister.

He attended primary and high schools, technical college and the College of Art in Toronto before enlisting with the RCAF on November 20, 1940.

When he enlisted with the RCAF, he stated he had no flying experience; his special qualifications were: painting, lettering and map drawing; his hobbies included: swimming handball, basketball, fencing and horseback riding. He was 5 feet 9.5 inches in height; with a dark complexion, brown eyes and dark brown hair.

Warrant Officer Class 2 Cachia enlisted in the RCAF on 20 November 1940 as a wireless operator / air gunner. He enlisted in Toronto, where he was living and working as a salesman at the Robert Simpson Company.  Enlisting for the war likely seemed quite natural for him as he had a brother and a half-brother who were already serving in the army.

Aircraftman Class 2 Cachia did his basic training at No. 2 Manning Depot at Brandon, Manitoba before being sent to No. 3 Service Flying Training School at Calgary while awaiting his formal training to start. This had the advantage of getting him inculcated in the RCAF as well as giving him the opportunity to learn from more advanced students. On 3 March 1941 AC2 Cachia, as he was then, was posted to No. 2 Wireless School in Calgary. Here he learned Morse Code and the basics of radio telegraphy, including basic repair of the radios. The next phase of his training took him to No. 4 Bombing and Gunnery School at Fingal where he learned the air gunnery portion of his trade.

On 20 August 1941 Sergeant Cachia was posted overseas, arriving in England on 28 September. He learned the latest wireless instruments and procedures at No. 2 Signals School after which he was attached to 285 Squadron for training on 16 December. On 16 April 1942, newly promoted Flight Sergeant Cachia was posted to No. 22 Operational Training Unit.

Operations at No. 22 OTU went smoothly for the most part except on the night of 31 July / 1 August 1942 when the crew returned from a mission. The crew’s Wellington was picked by searchlight cones while flying at 1,000 feet over Walcheren Island. Descending to 50 feet to escape the lights, the aircraft was hit by machine gun fire from the ground, one of which hit F/S Cachia in the upper right arm.

On 14 August, F/S Cachia and his crew were posted to 425 Squadron. The newly-formed squadron was still in the process of becoming fully-operational and it would be a while for the crew to fly a mission. However, on 1 November F/S Cachia was promoted to warrant officer class 2.

Two weeks later, the crew was able to participate in their first mission. On 17 November they were one of three aircraft who dropped mines, which was a normal operation for the first mission.

The next mission was on 23 November when they took off on a four-hour daytime reconnaissance flight over the North Sea. At 4:59 PM on 6 December, WO 2 Cachia and his crew took off in Wellington BJ657, call sign KW-G. They were part of a 272 plane operation against Mannheim. Nothing special was heard from them until 12:20 AM on 7 December at which time he requested a bearing to fly to return to base. This was the last that was heard of WO 2 Cachia and his crew.