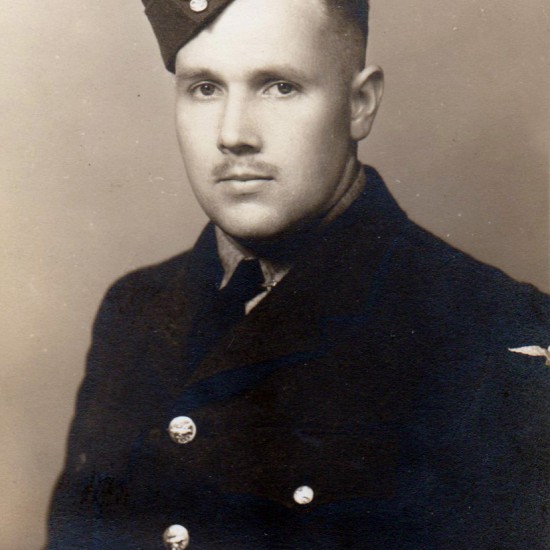 Pilot Officer Ronald Hayes was born in Birkenhead, England on March 26, 1914, the son of Victor and Amelia Hayes. He had three brothers; Reginald, Douglas and Stanley and three sisters; Mollie, Phyllis and Patricia.He attended Rock Ferry School, Cheshire and later he worked for his father who was a dairyman. In 1938, he emigrated to the USA, settling in Norfolk, Virginia; worked for the A & P Tea Company as a sales clerk and later for Ford Motor Company. On May 12, 1940, Hayes married Jeanne Elizabeth Owens in Norfolk, Viginia and they had a daughter, Elizabeth Delena, who was born on August 3, 1941 in Norfolk, Virginia.

Ronald was 5 feet 6.25 inches, had a medium complexion, blue eyes, and brown hair. He learned his parents’ house in England had been bombed and, as the USA had not entered the war at this time, As with several thousand Americans, he headed north to serve in the war. He travelled to Toronto, Ontario, where he found an address of convenience and went to the RCAF Recruiting Centre, enlisting with the RCAF on April 9, 1941.

The decision must not have been an easy one as he left behind his wife and child, both were still in Virginia. P/O Hayes began his RCAF at No. 2 Manning Depot in Brandon, Manitoba where he completed his basic training and on 28 May was posted to No. 2 Initial Training School in Regina, Saskatchewan. Here Aircraftman Class 1 Hayes learned the basics of the theory and engineering of flight, the basics of engines and of navigation. Having been enlisted to serve as either a pilot or a navigator, the tests at No. 2 ITS suggested he would best serve as an observer, as navigators were then known; however, there was a slight hitch. On 2 July 1941 newly promoted Leading Aircraftman Hayes was sent to No. 18 Elementary Flying Training School at Boundary Bay, south of Vancouver as the training system was backlogged. He next served for two months at the Composite Training School at RCAF Station Trenton in Ontario.

On 15 September 1941 LAC Hayes was posted to No. 10 Air Observer School in Chatham, New Brunswick to finally begin his observer training. He completed this successfully and was posted to No. 6 Bombing and Gunnery School at Mountain View, near Trenton, Ontario. Observers were not only navigators, they were also bomb aimers at this time. On 31 January 1942, LAC Hayes was fully trained to observer standards and was promoted to sergeant, fully qualified to serve as aircrew. Most graduates at this time were sent overseas; however, Sgt Hayes had to wait, and spent a month at No. 2 Air Navigation School in Pennfield Ridge, New Brunswick before being shipped to England on 4 March. On arrival in England he again had to wait for a training billet to become available, but was finally sent to No. 22 Operational Training Unit where he joined up with other members of the RCAF to form a crew.

Training at No. 22 OTU was designed not only to teach a crew on operational flying but also to bring them together as an operational team. Each crew would conduct several operational missions. Although not as dangerous as bombing missions, these flights which were primarily minelaying and leaflet dropping could be dangerous, some crews failing to return. While at 22 OTU, Sgt Hayes was promoted to flight sergeant

F/S Hayes and his crew were posted to No. 425 Squadron on completion of their time at 22 OTU. On the night of 6 December, F/S Hayes took off with a different crew, that of Warrant Officer Class 2 George Cronk as Cronk did not have a regular navigator. This would be F/S Hayes’ first operational mission. After bombing Mannheim, Germany the crew was heading back to base when at 12:20 AM the radio officer, Warrant Officer Class 2 John Cachia requested a bearing to fly to return to base. This was the last that was heard of F/S Hayes and his crew. He was posthumously promoted to pilot officer.
Royal Canadian Air Force
06
Dec
1942
Roll of Honour > Timeline > Royal Canadian Air Force > HAYES, Ronald