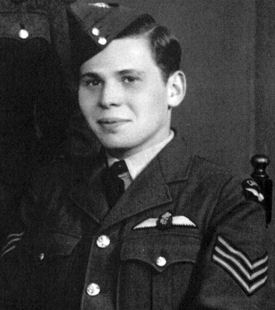 George was the son of John Benjamin and Esther Cronk. He was born in Toronto, Ontario on January 17, 1921. He had one brother, John Douglas Cronk.

George was 5 feet 9.5 inches in height, with a medium complexion, brown hair and brown eyes. He was not married; enjoyed playing tennis and skiing; and, when he attested, he signed up for the duration of the war.

His brother, John, was killed in an airplane accident on September 26, 1955 when the plane was tracking a hurricane over the Caribbean Sea.

Pilot Officer Cronk enlisted in the RCAF on 13 February 1941 in Toronto, being selected to be a pilot or an observer. He had previous military service, having been a corporal in the Queen’s York Rangers from 1936 to 1940 and then a corporal in the Irish Regiment of Canada from 1940 until his enlistment in the RCAF. Four days later he began his basic training at No. 1 Manning Depot in Toronto. With the training billets being filled up, Aircraftman Class 1 Cronk was posted to No. 1 Service Flying Training School at Camp Borden, Ontario. The two months here would not be wasted as he would be able to mingle with fellow pilot trainees and learn from them.

On 15 May 1941, AC1 Cronk was posted to No. 3 Initial Training School in Victoriaville, Quebec. Here he learned the basics of the theory and engineering of flight, the basics of engines and of navigation. Having been enlisted to serve as either a pilot or a navigator, the tests at No. 3 ITS suggested he would best serve as a pilot, so on graduation he was sent to No. 16 Elementary Flying Training School in Edmonton, Alberta, now promoted to Leading Aircraftman. Having succeeded at basic flying skills, he was posted on 20 August to No. 3 Service Flying Training School in Calgary, Alberta. On 7 November he graduated, receiving his pilots’ wings and a promotion to sergeant. He was also slated to serve overseas.

Sgt Cronk arrived in England on 19 December 1941 but did not begin any formal upgraded training until 9 February when he was sent to No. 3 (Pilot) Advanced Flying Unit, including time at No. 1511 Beam Approach Training Flight. On 24 March he was sent to No. 22 Operational Training Unit where he would select a crew as much as he was selected to be part of a crew. Here, he and his team, which consisted of four fellow RCAF members, flew Wellington bombers in preparation for operational deployment with a bomber squadron, conducting leaflet drops and mine laying operations as both operational and training missions. On one of the operational missions, the crew was flying back to England and while crossing Walcheren Island was coned by searchlights. F/S Cronk dived down to 50 feet to escape the light but in the process brought the aircraft within range of machine guns, which began to fit the fuselage with rounds. Although the aircraft was not seriously damaged, the wireless operator, Flight Sergeant Cachia was hit in the upper right arm.

On 14 August 1942, F/S Cronk and his crew were posted to 425 Squadron, one of the first crews to be posted to the newly-established squadron. It would be a while before any of the crew flew on operations as the squadron was still in a reduced operational mode as it trained its crews and personnel. On the night of 13/14 October Cronk went on the standard flight as a second pilot on a mission which was required of all pilots to familiarize them with squadron operations. This mission was an attack on Kiel in which the aircraft was hit by flak over the target. It would be a while before his next mission, but the wait was made sweater by the fact that he was promoted to warrant officer class 2 on 7 November.

The first flight as a crew was on 17 November when they were one of three aircraft who dropped mines. The next mission was on 23 November when they took off on a four-hour daytime reconnaissance flight over the North Sea. At 4:59 PM on 6 December, WO 2 Cronk and his crew took off in Wellington BJ657, call sign KW-G. They were part of a 272 plane operation against Mannheim. Nothing special was heard from them until 12:20 AM on 7 December at which time the radio officer, Warrant Officer Class 2 John Cachia requested a bearing to fly to return to base. This was the last that was heard of P/O Cronk and his crew. He was posthumously commissioned as a pilot officer, backdated to 30 November.